Running a Giveaway with Gleam

This week I hosted a Giveaway/Contest for the readers of Baeldung. I gave away 5 copies of my Spring Security Video Course (Packt) – using Gleam (gleam.io).

I really had no idea what to expect going into this – so now, at the end of the event, I’m publishing the full results here for anyone thinking of running a similar campaign.

Let’s start with the Giveaway Page – as you can see, the entire Giveaway content is set up in Gleam and only embedded on this page: 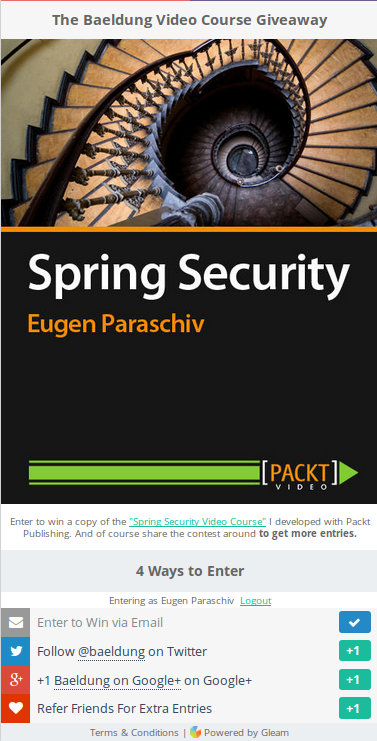 The main way to enter the giveaway is of course email – that counts as 1 entry. I have set up 3 alternative ways to increase your chances of winning:

So – pretty straightforward all in all – took me about an hour to set up and off it went.

2. How I Promoted the Giveaway

Promotion of the Giveaway is of course the most important thing. Here’s what I did:

And here’s the breakdown of the actual results that came out of the campaign:

Finally – here’s the full traffic, actions and users – graphed for the entire duration of the event:

4. What You Can Do Better

First off – Gleam is a nice system for running a Giveaway; it’s not free, but it is reasonably priced at 39$.

Now that the event has finished, the one thing I would recommend if you’re aiming to go beyond the results I had here is to up the ante with the giveaway. Basically – give away something more valuable to your audience. The Spring Security Video Course is (usually) priced at 30$, so the value of a copy isn’t huge. Going with a higher ticket item – but still relevant to your audience – will increase the engagement and the virality of the campaign.

For my next event, that’s what I’m planning to do – pick something that is both highly relevant for my readers, but also just higher value overall.

Hopefully that gives you some insight into what kinds of results you can expect out of a Giveaway/Contest like this. The numbers aren’t huge, but they’re definitely not negligible either.

Thanks for the awesome writeup Baeldung! I hope you had a postive experience using the product 🙂

Hey Stuart – I have – it’s was definitely useful, especially for a contest. Thanks.
Eugen.