My blog has always had its ups and downs in terms of traffic – that’s just a fact of life and something I’ve come to expect. I have not yet had however the kind of traffic increase that I seem to be seeing during the last few months.

Besides traffic volume, my stats are largely unchanged:

Search traffic has largely been the main source of my traffic increase – a steady 65.5% of my overall traffic (~50 000 pageviews) – which represents a 29% increase from last month.

March wasn’t a typical month for referral traffic either – mainly because of my focus on Google Plus: 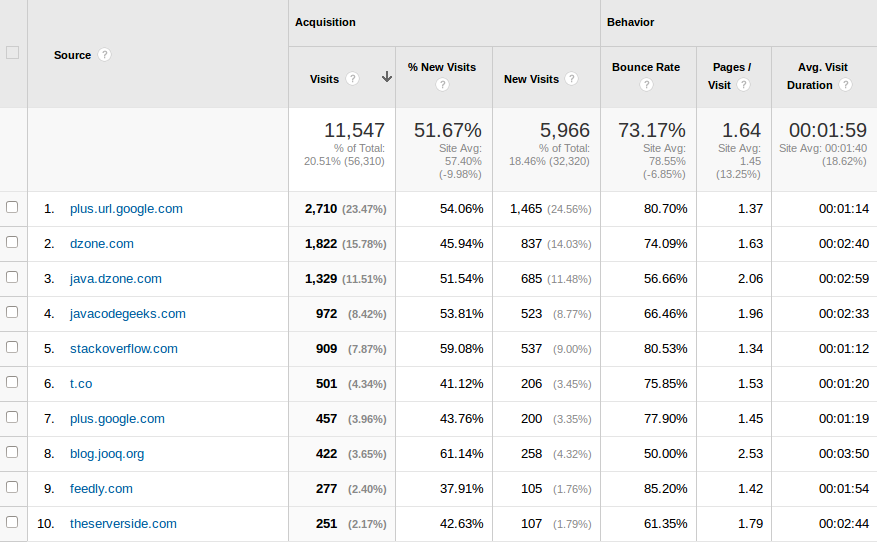 As you can see, Google Plus is now my number one referrer (and my number 7) – which is nothing short of a staggering 530% increase there. I’ll write about how I got to these kinds of numbers at some point on this blog (and sooner than that on my email list).

The other unexpected and very cool referrer this month is the jOOQ blog – this is a great resource that I’ve been reading for a good while now and so it’s exciting to see it in my top 10 referrer list (thanks Lukas).

Growing my email list has been the number one goal for the last 6 months – and March has been no different. I gained 530 new subscribers this month – up to a 2184 at the end of the month. This makes March a new record for me – and considering that I have not been running any new experiments in March – I am considering it a very good result.

At the very end of March, I started running a new experiment – a new optin widget at the very bottom of the page – which starts out closed:

And can then be opened and used to opt-in: 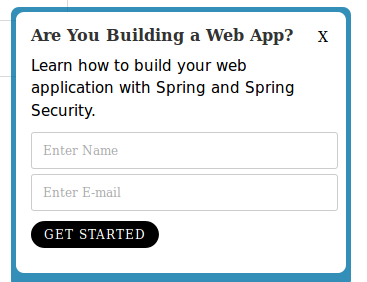 This month I wrote about my plans of building and launching an infoproduct. Over the month of March, I have been creating the product pages and driving traffic to these pages. My main goal is building out the launch email list – which is no easy task. It is however a lot of fun and I’m learning quite a bit about conversion optimization, tracking various traffic sources, optimizations, etc.

Given the relatively low traffic on these pages, experiments and optimization does take longer than it does on baeldung – where I can see if something or not is working a whole lot quicker. I’ll write about the details of that process as soon as I have enough data in.

All in all – March has been a month of steady traffic growth for baeldung and a lot of learning with the new infoproduct pages (which I’m going to be revealing the URLs of soon). Exciting times ahead.