Posted by: Eugen Paraschiv in Montly Reports May 6, 2014

Here we are, well into May – time for a new monthly report. I did a bit of traveling during April – so Baeldung was on autopilot most of the month.

I did manage to publish 2 new articles and 4 weekly reports, as I’m trying to get into the habit of writing more consistently in 2014.

Overall traffic has grown slightly in April – from 81K to 87K pageviews:

And the stats for April:

The referral traffic on Baeldung has remained mostly the same as the previous months – with the exception of Google+ which – after the initial spike driven by engaging in different communities – has now leveled to about half of last months numbers (which is still a lot higher than I was seeing before). 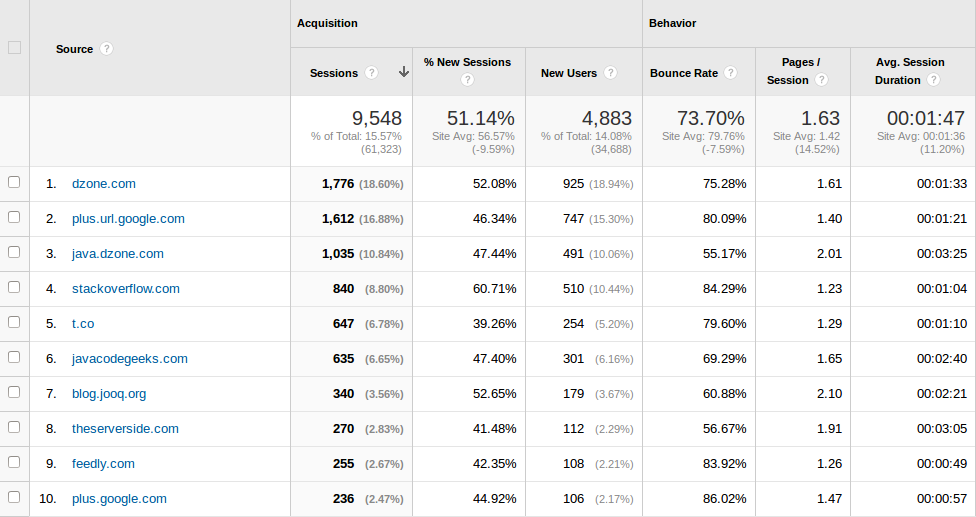 This has been a steady month for new subscribers – with 541 new email subscribers up to 2725 at the end of April.

Aweber does not make it easy to find this simple information via their reporting tools – but an advanced search with some specific conditions does the trick:

The main thing that took a lot of time this month was a redesign of the blog. Unfortunately – after going live for a full week with the new design – I had to revert it due to a number of bugs as well as not stellar communication with the designer. Lots of lessons learned here, but also some lost time during April.

On to the more interesting part of the report – my courses. I am going to write an update on that soon – but overall, progress has been slower than I would like.

I did manage to go live with 6 product pages, drive some traffic to them and get a good idea of the baseline for how well these convert. I am mainly driving traffic via Facebook ads, some reddit traffic as well as from baeldung itself.

Now comes the not so glamorous but necessary task of fine-tuning the copy and A/B testing the heck out of these pages.