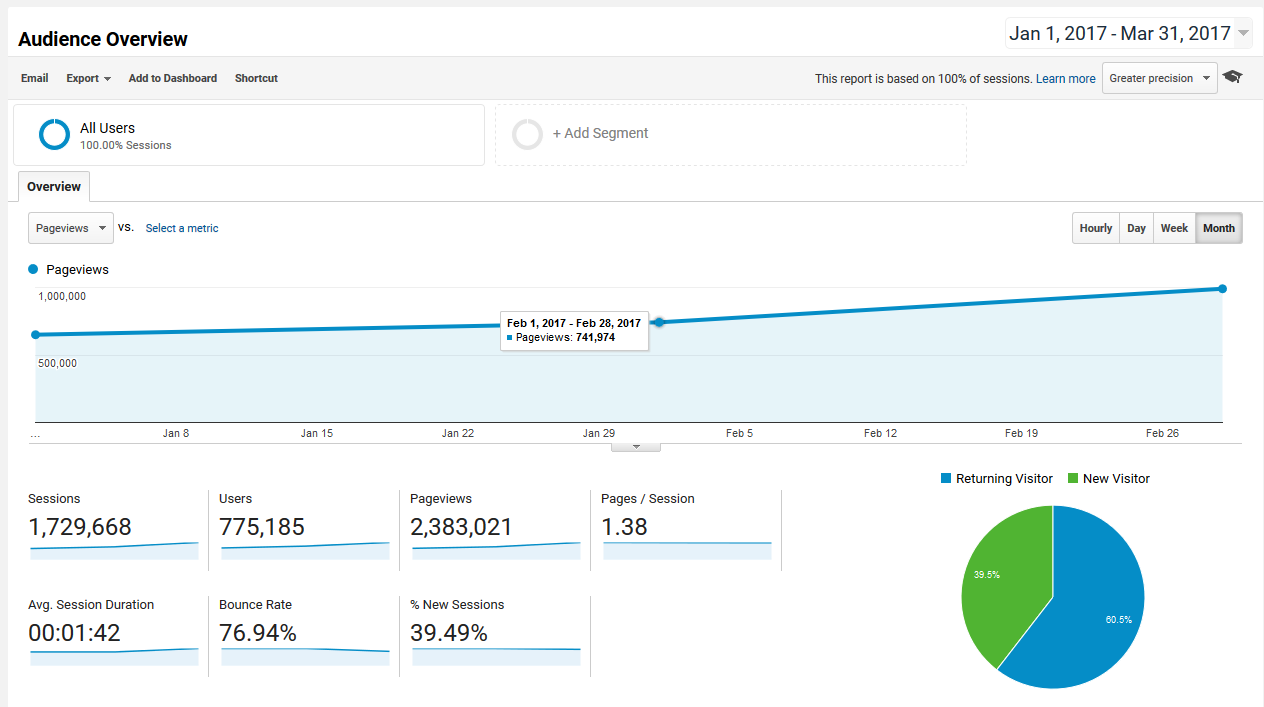 Let’s jump right in with a traffic update for the site.

Q1 has been a bit crazy in terms of traffic – which is a steep 43% increase over Q4 of last year:

The new traffic is, of course, correlated to the increase in content production on the site – more on that later.

Let’s now have a quick look at the referral traffic as well:

Nothing out of the ordinary here – but definitely some interesting data to track.

As I briefly mentioned earlier, the traffic growth isn’t entirely unexpected, given the fact that we’ve upped our content game in recent months.

The total number of articles we published in Q1 is a whopping 187 new pieces of content – which is almost 50% more than Q4 of last year.

And, the goal of removing myself from the day to day content work is slowly moving forward as well – although that work is not yet very far along.

The email list has always been a focus for me – primarily because I like knowing who my readers are and engaging with them directly.

The email list inched over 34.5K at the end of March, after a few rounds of pruning and cleaning up subscribers who weren’t engaging with the material.

My recording voice isn’t back up to 100%, so I had to delay working on some of the bonus lessons in the courses, as well as the launch of the new course.

Right now, my tentative goal is to announce the new course in May – but that still depends on how well I can record.

But, new material aside – it’s great to see how my existing two courses are helping so many new students every month.

And with that, I’m going to wrap up this review of Q1.

Good to know that you are planning a new course in
May. Will it be possible for you to share some details about the course?
Or, at lease the high level description?

Hey Yasin,
This is going to be an framework-focused course – called: Learn Spring.
I’ve been getting a lot of questions about that, because both RwS and LSS require some basic knowledge of Spring, so that’s what this course is going to focus on – the framework itself.
Hope that clears things up.
Cheers,
Eugen.

Good to know that Eugen. All the best.

Hey Eugen,
I am trying to implement a spring boot application with oAuth2 integration. I am a newbie to the concepts of Spring Boot, oAuth and Spring Security.

I have created a demo application. However, I am not able to get it working. Request your help in this regard.

Hey Vidya – sounds good, but this isn’t the right place to talk about that 🙂
This site is mainly focused on the behind the scenes and marketing of hte main site – so it’s not really technical.
Feel free to reach out to me over email. Cheers,
Eugen.

No worries. You can simply reply to any of my email – the replies go right into my inbox.

Really appreciated your efforts on this and I really liked how you are sharing those details with everyone :).

People generally don’t share behind the scene work but you are doing it in different way. Keep you the good work !!!

Hey Umesh,
I’m glad you’re finding the internal details of the site useful.
Yeah, I get a lot out of these kinds of posts when other people do them – that’s why I post them myself as well.
Cheers,
Eugen.

Honestly, your work is a reference for me.This give me a lot of insight and inspiration.
Thanks for sharing these details

Thanks for sharing site insights. These are very motivating. I android developer but from last 6 months working on spring. Your site is very helpful during this period.

I’m glad the updates there are helpful 🙂
Cheers,
Eugen.