Baeldung June 2014 Report – Most Traffic Ever

So – last month I got some Panda 4.0 lovin’ – when my search traffic more than doubled half way through May. More traffic is always great of course, but it did mean a potential 200$ monthly WPEngine bill – so I switched hosting providers. I wrote about the experience here – with an eye towards the speed of my site before and after the migration.

So let’s see how the numbers look for June.

The overall traffic results for Baeldung:

As you can see – the big jump from last month has held steady; next – the stats on the site:

All in all, the best month on Baeldung – ever.

Referral traffic has gone done a bit in June – probably because I’ve been busy and haven’t allocated a lot of time to things like Google+: 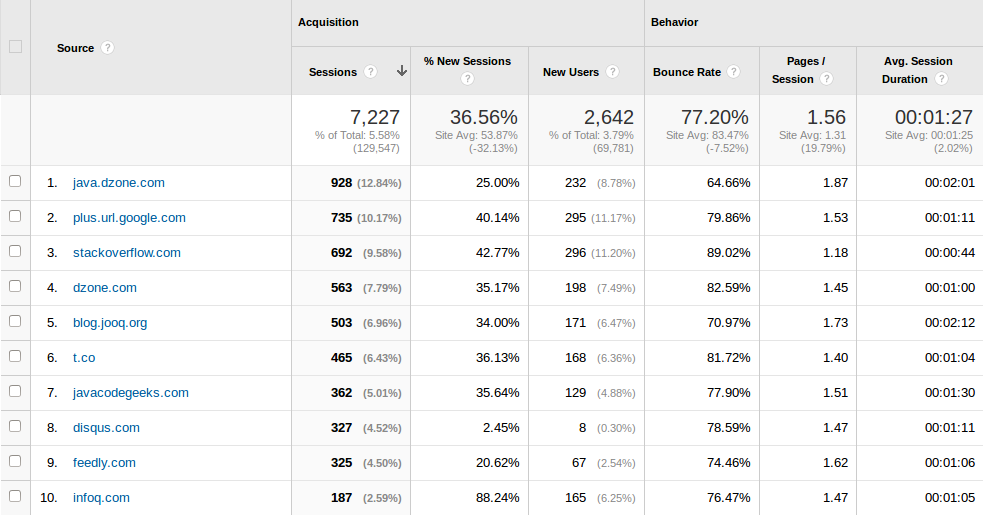 The one interesting source here is Disqus – which, strangely enough, had a significant spike around the same time as Panda 4 rolled out. I don’t see how the 2 can be related, but here we are – Disqus is my number 8 referrer now.

Unfortunately SEO traffic doesn’t have a great conversion rate for Baeldung – compared to the other traffic sources. That meant that even though I am seeing more than double the traffic – that traffic doesn’t equate to double the number of email subscribers.

All in all – it was still my best month in terms of email subscribers: 736 new subscribers for the whole of June.

In the latter half of the month I created a new list in Aweber:

So all in all – not to shabby – more than 50% increase compared to last month – so I’m not complaining. I am however running a few experiments that should allow me to convert more pass-by visitors to fans and email subscribers.

Plans and Other Going Ons

Last month I started the building out my first independent video course (the Spring Security course with Packt wasn’t really independent). I’m moving forward with the recording, but at a much slower pace that I would like – which is not unexpected.

I have also reorganized my entire autoresponder series (which is why I had to create another list in Aweber) – basically separating everything into courses and using a more logical cadence overall.

Finally – I have continued to commission hand lettering illustrations for Baeldung (you can see these on the G+ page). Among several A/B tests and experiments I’m running on Baeldung – I’m getting these illustrations done for an entirely different reason – they just look cool.